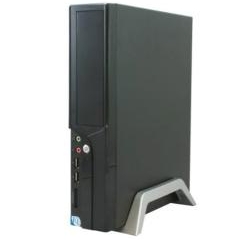 So a week ago a friend of mine read an article on Engadget about setting up a home file server using FreeNAS. He asked my opinion about the software, not knowing I have been running my own FreeNAS server with great success.

The FreeNAS version at the time of this writing is 8.0.3. It has some pretty hefty requirements for what I would consider necessary for home use. I am still using the last stable release of FreeNAS 7 which runs on lower end hardware, and has a few more features then its newer incarnation.

When they were on clearance, I purchased a MSI Wind Nettop bare bones system in hopes of making a Hackintosh. It had similar hardware to the Dell Mini 9 but unfortunately the dual core Atom 330 was not supported, so I put it in the closet.

Shortly there after I began having issues with my Apple Time Capsule and needed a replacement. While researching options I found FreeNAS had an embedded install feature. The Nettop sitting in my closet was equipped with a bootable Compact Flash card expansion slot.

So I found an old CF card, 1GB ram, and purchased a Green 2TB SATA hard drive. Installing the FreeNAS software was a snap, and after the initial setup all other configuration is done via web page so the machine sits headless in a corner.

I formatted the hard drive as a single UFS partition. I then mapped mount points depending on the protocol being accessed. SMB for Windows, AFP for OSX, and RSYNC for Linux took care of my immediate needs. After setting up various user accounts, I set the spin down time for the disk and was ready to go. The only down side with this unit is the lack of redundancy. This was not a concern as I use it solely for backups, but I would at minimum mirror the single drive if it was going to be my primary central storage.